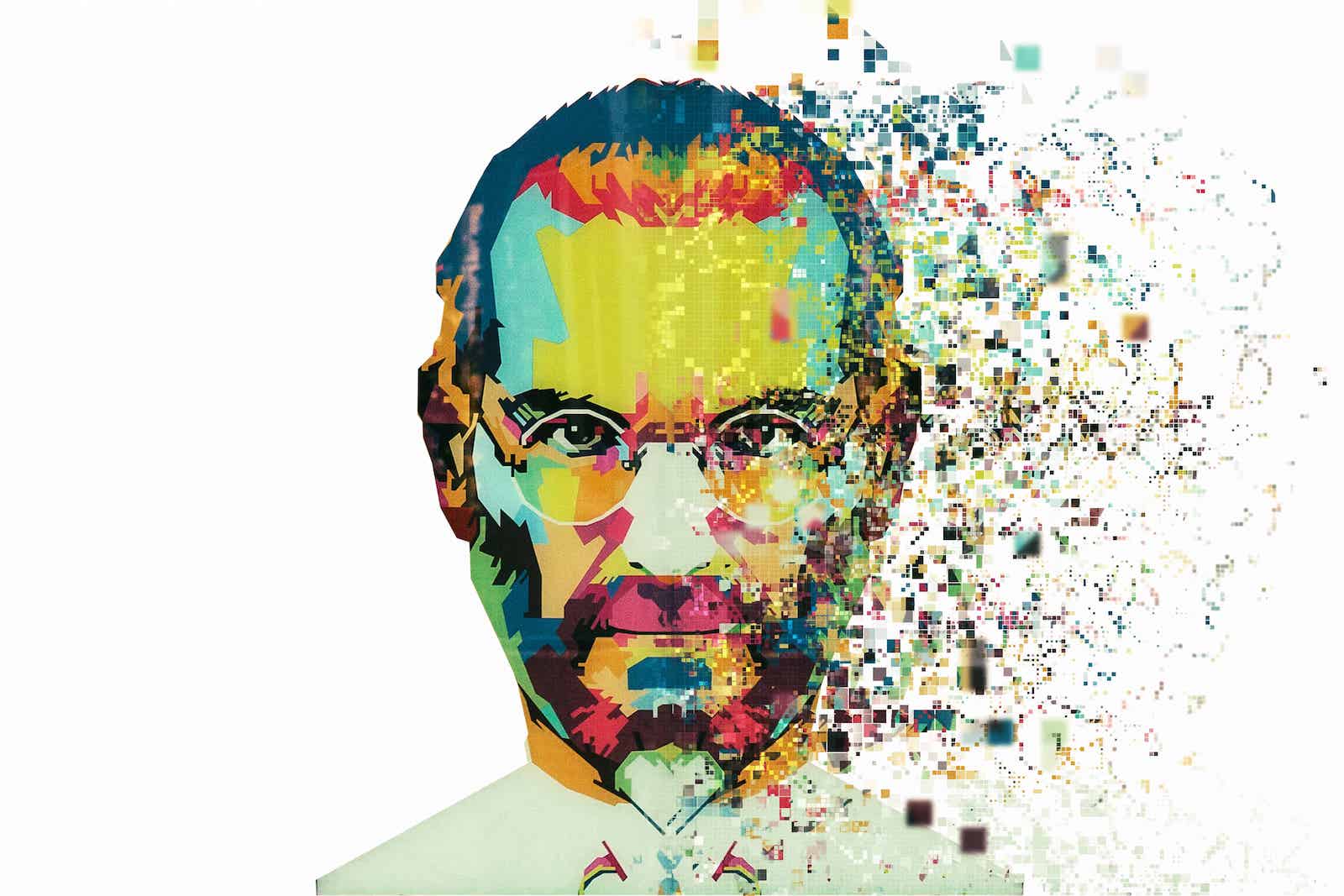 Steve Jobs was more than the iPhone and his black turtleneck.

Beyond all of his technological achievements, Jobs was an excellent manager and innovator.

He is widely recognized as one of the pioneers of the microcomputer revolution that gave us the ability to manage our lives from devices that fit in our pockets.

And with a biography that includes not only Apple but active participation in the management of Pixar, Disney, and NeXT, we couldn’t help but to wonder:

What can small business owners learn from Steve Jobs?

In this post, we’ll talk about 10 important life and business lessons small business owners can learn from Steve Jobs.

Regardless of what you do, Steve’s philosophy can help you stay on the right path.

1. Being a Leader and Being a Boss Are Two Very Different Things

Did you know that Steve Jobs wasn’t a great computer engineer?

Quite a shocker, huh?

Well, he knew what his strengths and weaknesses were, and he was happy to bring Steve Wozniak on board to help him.

He wasn’t afraid to say that he didn’t know something. There were no headlines proclaiming that he was a horrible boss who always had to be right.

Steve Jobs had no problem taking the backseat, learning and putting trust in the people he perceived as talented.

Throughout the years, Apple got to where it is today not because of Steve alone, but because of incredibly competent associates like Wozniak and Cook (that he brought on board).

As a boss, you have to make decisions. You have the final say.

And as a leader, you have to get as many perspectives as possible.

You have to surround yourself with people who have valuable insights for your business.

But you also have to be a leader who recognizes talent when they see it.

2. Don’t Be a Perfectionist, but Keep the Perfect Thing in Mind

A lot of people today claim that Steve Jobs was a perfectionist.

After all, he was willing to completely scrap products that were halfway done. After working on the iPhone for a year, Steve ordered his team to start all over because it wasn’t turning out right.

Guy Kawasaki, who worked with Jobs in the past, once said that: “Steve Jobs was very difficult to work for, very demanding but I would not trade that experience for anything.”

And while he believed that his company always had to look forward instead of staying still and enjoying their current success, Steve wasn’t a perfectionist.

He was simply driven by the idea of what the perfect product should look like.

And he didn’t even have to hire consultants for market research in order to get there.

There’s only so much you can do in 24 hours, so make sure it counts.

We live in the world of mass-production and often, the sheer quantity mandates sacrificing quality.

Develop products and services that you would be proud to show your family and friends. Strive for quality.

So instead of focusing on profits, focus on products your customers will be delighted by, be that superior customer service or new features.

In 2007, Steve Jobs quoted Wayne Gretzky by saying: “I skate to where the puck is going to be, not where it has been.”

And when you take a look at how he’s managed Apple, you can tell that Steve Jobs never rested on his laurels.

Instead, he focused on what wasn’t working in the current market.

iPod was developed as a better alternative to MP3 players. Mac became one of the fastest, sleekest PCs on the market.

Yes, he was innovative in some cases. But in others, he simply anticipated trends and understood customer sentiment.

When something wasn’t working, Steve Jobs found a way to improve it.

You don’t always have to be innovative and focus on creating new things that the market hasn’t seen yet.

Instead, you can focus on improving the things that already exist.

Your customers are frustrated by products and industries like yours. Your mission should be improving their experience.

That’s the ultimate opportunity that doesn’t require you to launch a car into space.

And while Apple certainly had its fair share of flashy products, the behind-the-scenes functionality wins over customers.

Improved security, improved speed, higher capabilities of the devices… All of these things are what made Steve Jobs’ products that successful.

So if you want to be like him, anticipate trends and opportunities on the market. Talk to your customers. And give them something better.

Without Jobs, Apple would be another faceless IT company. Just think about it: do you associate HP or Huawei with a particular face or a particular brand image?

Chances are, you don’t.

But when we say “Apple,” you immediately think of Steve Jobs.

It’s because Steve Jobs embodied his company’s brand; he showed up to conferences and spoke publicly. He vigorously advocated for Apple’s mission in the IT sector.

And he was extremely, extremely passionate about what he did.

Or, as he once said: “You’ve got to find what you love. And that is as true for your work as it is for your lovers.”

A brand isn’t something you hire your marketer to create for you.

Instead, your brand should come from you.

Why did you start your company? How did you first get interested in the industry? What do you do that no one else does?

You need to create your brand story out of your own story, and then stick by it.

Be honest, and your customers will be able to align their own values with yours.

He was anything but chaotic.

He went out of his way to focus on the products he believed in. When he felt his tasks were too tedious, he changed his focus.

He was sure of what matters, and he did everything to take care of meaningful work first.

It’s why Apple became a $30 billion company with less than 30 major products.

While the pull to do everything is strong (especially if you’re a small business owner), resist it.

Know your priorities and organize your work accordingly.

Yes, you should reply to that email, but if you could be doing something more valuable at the same time – put the valuable task first.

You don’t have to completely neglect your work to do it. After all, we’re not all Steve Jobs who can hire other people to manage their companies while they focus on innovation.

However, you can manage your time better.

Look into simple project management tools like Breeze, and you’ll see the big picture on a single workspace.

Techies are notoriously famous for making things as complicated as possible.

The first computers required you to basically take up programming and create apps on your own.

And today (largely due to Steve Jobs and the iPhone), we’re only two clicks away from everything we need.

Apple, with Jobs at the helm, constantly simplified their products.

In part, this was due to Jobs’ fascination with Joseph Eichler’s architectural design.

At one point, he said: “It takes a lot of hard work to make something simple, to truly understand the underlying challenges and come up with elegant solutions.”

If users had no need for a certain feature, it’d be removed in the next iteration of Apple’s products.

When your products and services are simple enough, then (and only then) can you say you are done.

Resist the urge to retain a plethora of features your users aren’t even looking at.

Make things as simple as possible for your customers.

This goes for providing services, as well.

For example, if you’re a web designer, you don’t have to explain the ins and the outs of your process to your clients.

All they need (and want) to know is that they’ll have a beautiful website.

7. Don’t Chase After Your Competitors

After being in business for a while, it’s easy to shift your mindset from innovation to competition. Or, better yet, keeping up with your competition.

Of course, the first thing they tell you when you decide to found your company is that you should stay ahead of the competition.

But Steve Jobs advocated for something else.

Jobs advocated for being a misfit and following your own path.

Or, as he famously said: "Here's to the crazy ones--the misfits, the rebels, the troublemakers, the round pegs in the square holes.The ones who see things differently, the ones that change things."

And in addition to improving upon the products already available, Jobs always stayed ahead of the curve because he had his own curve.

Keep an eye on your competition, but don’t forget to look farther ahead.

If you had wild ideas when you first started your company, don’t lock them up and forget about them as you chase profits.

Make sure you always reconsider them. Again and again.

Every day, you’re getting tons of new information that can change the context of your ideas. That can make them – or parts of them – viable again.

So don’t try to emulate everyone else.

Create your own brand and set your own standards of excellence by listening to what your customers need and what you think is right.

8. Take Risks and Go with Your Gut

Yes, taking a huge risk can be scary. Especially if you’re just starting out. But the stakes have always been high.

Steve Jobs knew that, whenever he hesitated, someone else could appear on the market with a similar product idea to his own.

He knew his ideas were not unique.

But he also knew they were not expendable. He did everything he could to validate and launch them as soon as possible.

Don’t be afraid to break conventions.

If Steve hadn’t been brave enough to risk losing iPod’s share of the market because of iPhone (AKA: he competed with himself), Apple wouldn’t have been known as the best mobile device in the world.

And as a business owner, sometimes you have to take the risks your gut is telling you to take.

9. Fake Your Way to Greatness

So many business owners struggle with impostor syndrome. In some cases, it’s completely warranted.

It was in Steve Jobs’ case, that’s for sure.

When he originally founded Apple, he set up a PO box in the Silicon Valley and got a phone answering service to make investors and customers think that they’re one of the big companies – even if they were working out of his garage in Los Altos.

Even if you have a small brick and mortar store, that doesn’t mean you can’t be great or create a perception that your business is much bigger.

This is especially true if you’re struggling with impostor syndrome. Make yourself as important as you want to be.

Don’t wait for an uptick in foot traffic or a revenue increase to improve the value perception of your business.

Start treating your small business like it’s an empire right away. It’ll change the perception of your customers and your competitors.

You’ll be in the big leagues, without having to do as much work.

Steve Jobs succeeded in incredible ways. And he failed magnificently, too.

Once, he even lost a quarter of a billion.

But he got right back up, even after he was fired from Apple in 1985.

He didn’t let that stop him.

Instead, he went on to buy Pixar. And when he returned to Apple in 1996, he did so with a plethora of creative product ideas.

Failure is normal. If you’re failing, it means you’re learning.

Make sure you draw lessons from every mistake, and then overcome the obstacles in your path.